NWTC is honored to announce that Jeff Tyndall ‘77 has been named the 2020 recipient of the NWTC Distinguished Alumni Award.

After serving in the United States Air Force, Tyndall enrolled at NWTC in the Mechanical Design associate degree program and began what would become a successful education and professional career.

Even before graduation, he had secured a job at Paper Converting Machine Company (PCMC) in Green Bay. Tyndall spent much of his career at the company, from his beginning as a mechanical detailer to technical support team member. He retired in 2016.

Tyndall, with the help of his employer, established the Jim and Laura Tyndall Memorial Scholarship Fund at NWTC in 2010 after his son and daughter-in-law were killed in a car crash.

Tyndall said his goal over the next few years is to increase the Jim and Laura Tyndall Memorial Scholarship Fund endowment balance to $100,000. 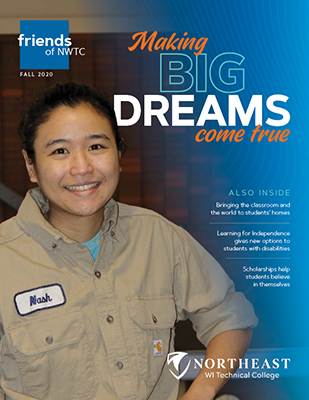