Sometimes the seeds of a simple beginning grow into something that will change lives forever.

NWTC’s Green Bay campus is usually bustling with human activity now, but the site was once an apple orchard. Johnny Appleseed had nothing on a group of dedicated supporters who, in 1969, sold apples from the NWTC construction site. Proceeds from the sales helped make the College what it is today.

As cited in a 1977 NWTC Educational Foundation, Inc. publication:

The Foundation bylaws, charter, IRS status and statement of not being a private foundation were established by dedicated individuals who saw it evolve from a modest start (funds were derived from the sale of apples on the new site for campus construction).

On April 2, 1970, with $14,000 from apple sales and other donations, the NWTC Educational Foundation officially became a non-profit organization with a goal to provide students with scholarships and support to empower them to continue their education and earn a degree. Those same principles guide the Foundation Board of Directors today.

“NWTC has a primary goal of being able to match the needs of education to the businesses in the area and ultimately to improve lives of the community and the students that graduate,” Joe Langer ‘74, NWTC Educational Foundation board member said. “It’s really about building the workforce of tomorrow.”

The first years of the Foundation were dedicated to raising money to build an endowment, with the first scholarships awarded to four students in 1974.

Now, the Foundation awards scholarships averaging $750 to about 850 students per year—students like Dani Mayer ‘01.

Mayer started at NWTC in 1999 to pursue an associate degree in nursing. As she made applesauce with her four-year-old son in her De Pere kitchen, she reflected on the struggles she went through that first year of college and her determination to graduate without incurring crushing debt.

“I was working three jobs at that point,” Mayer said. Paying her rent, car payment, studying and working sometimes all day and night, the stress began impacting her health.

“It was just a rough time,” Mayer said. “My arms were full of psoriasis. That was my first and only breakout I ever had, because of the stress of everything.”

“I don’t even know why, I just thought it was a sign from God,” Mayer said. “Like, oh, God is giving me this. I need this at this point in my life.”

Mayer received a $1,000 scholarship, giving her more time to focus on her studies instead of worrying how she was going to make ends meet.

“That was a huge financial burden lifted,” Mayer said. “That’s quite a bit of money for a student. It all went right towards the books and the next semester. That was pretty huge.”

She worked hard and graduated from NWTC without student loans, which she probably would have needed without a scholarship.

“It was two years, but a tough two years,” Mayer said. “You’re just so proud of yourself. I don’t know how I did it, but I did it.”

Following graduation, Mayer continued her nursing career at HSHS St. Vincent Hospital, where she has been for over 20 years. She is a registered nurse in radiology.

“I love helping people and making them feel better and helping them through hard times,” Mayer said.

Her true love and passion is at home with her family. “I love being a mom,” Mayer said. “I have four kids and that is what I wanted.”

To the donor who showed Mayer someone was behind her and believed in her, she is forever grateful.

“To take some of that burden off of you at that point in your life when your stress level is so high and you’re working so hard to get over this hump of education and to get to that career path, I mean, there are no words. [I am] so grateful,” Mayer said.

Seeing students work hard, graduate, live their dreams and stay in this community is at the heart of everything the Foundation does at NWTC.

“Everyone in Northeast Wisconsin deserves access to higher education, regardless of their financial situation and life circumstances,” NWTC Educational Foundation Director Crystal Harrison said. “All of this would not be possible without all our dedicated donors, board members and College Advancement and Foundation staff. Their commitment to our students is making college a reality for someone who may have not believed it was an option.”

“The Foundation has played a very critical role in the growth of the College,” NWTC President Jeff Rafn said.

As the college grew, so has student need. About 40% of NWTC students are low-income.

“The Foundation has also supported the Shared Harvest food program, providing food to students,” Rafn said.Other special programs allow some students to access childcare that allows them to come to the College. In 2010, NWTC created the Student Emergency Fund with donations from the NWTC Educational Foundation. SEF is short-term financial assistance for students who run into unforeseen financial emergencies, so they can focus on their studies and earn a credential that will lead to a living wage.

Last year, the Foundation provided $1,150,000 to help ensure student success. Receiving a scholarship or emergency funding can be crucial to completing a semester.

“Investing in our students can start a chain reaction that leads to stronger communities and a healthier economy,” Harrison said.

Looking back, it is hard to believe a simple apple sale grew to transform lives and the northeastern Wisconsin community.

“The community is the primary benefactor of all that NWTC provides,” Langer said. “I really think we have a richer community just by having the NWTC Educational Foundation and this college in it.” 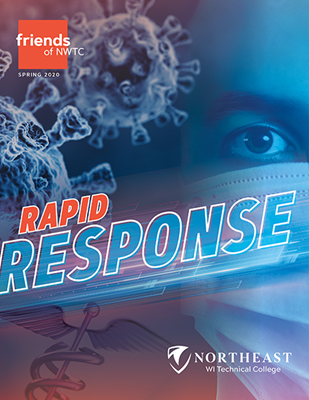