‘I didn’t want to go back to what I was before’: NWTC-Marinette Graduate goes from behind bars to c

Home » News » Friends » 2019 » November » ‘I didn’t want to go back to what I was before’: NWTC-Marinette Graduate goes from behind bars to c

The road to college for Shannon Flores was rough, full of obstacles and consisted of a few major detours.

The California native dropped out of high school in ninth grade, and at the age of 19 gave birth to her first son.

After welcoming her second son, and enduring another stint in jail, Flores decided it was time for a positive change. She wanted to do better for herself and her family.

“I was 35 when I got my GED,” Flores said. “When I got that GED, I did it on my own. That gave me a new self-respect, accomplishment and drive. I didn’t want to go back to what I was before.“

Following her release from jail, Flores moved to Menominee, Michigan where she entirely changed the course of her life.

One of the first things she did was enroll at NWTC-Marinette.

She started out in business management, but ultimately realized manufacturing was the industry for which she was best-suited. Flores then switched to the College’s Computer Numerical Control program, also known as CNC.

“It turns out, I really enjoyed it,” she said. “And things went up from there.”

Just two short years later, Flores was chosen to be the student speaker during NWTC’s May graduation ceremony.

Flores said she is hoping others hear her story, learn from it and use it as inspiration to never give up.

“Maybe it will let others know what I have been through,” she said. “Anyone can walk the path to success. Everyone is going to go through hard times, you can’t let that discourage you.”

NWTC-Marinette, she said, was the best choice for her. Not only did she get a job immediately following graduation, but her eldest son began the CNC program at NWTC-Marinette in the fall.

Flores could not be more happy her son is following the path to higher education that led her to a brighter future. 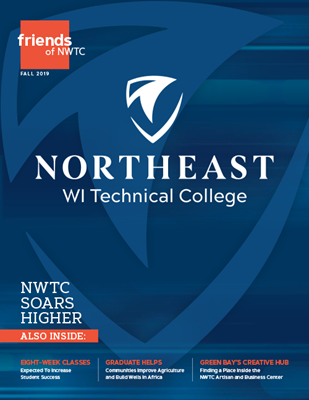