Video and tabletop gamers are creating a home at NWTC, and NWTC is responding by becoming the first Wisconsin Technical College to embrace gaming.

NWTC counselor Wes Johnson is NWTC’s first eSports and Gamer Club advisor. “I started it over the summer, just recognizing that so many of the students I was working with have an interest in gaming. We created it to help students feel they belong at NWTC.”

Even though half of U.S. adults play video games, Johnson still was surprised by the fast reaction to NWTC’s club -- which has exploded to 67 members and is climbing.

“I think the stereotype is that gamers are going to be socially awkward and anxious,” he said. “But by and large they’re very social people who are doing well in their classes, they’re moving forward, they just love gaming in their free time and doing this together.”

As part of its new gaming culture, NWTC is making room for eSports--competitive video gaming. The College has a new eSports Zone with gaming-ready computers, the NWTC Gamer Club for recreational gamers, and competitive teams.

Hampton Bleibtrey and friends from NWTC play League of Legends, both casually in their free time and competitively in different cities. The College’s support for eSports started with him.

“I’m having an overall League of Legends faction, where even if you’ve never played before, you can join. We had a team last year, formed with guys from class who wanted to start a team.”

Hampton met regularly with NWTC administrators and faculty (many of whom are also gamers) to organize the College’s first tournament. “In general I’ve been very surprised,” especially by the staff interest, he said. “Usually, I think older faculty members would not be as interested as they are, but the Vice President of IT plays World of Warcraft.”

“I thought this school was more of a serious zone, no games, but the more I talk to people, the more they’re interested. A lot of people I’ve met here are totally down with it. It’s totally awesome.”

Hampton has been gaming nearly all his life. “My friends and I always had consoles growing up. We’d go to people’s houses—I’d pack up my console in my backpack and ride my bike to my friend’s house.”

Daniel Knapp, a Network Administration student who is also on the League of Legends team, says they may practice up to seven hours a week. “I’ve been gaming for so long—it’s a stress reliever, a good time-killer, and it’s a good way to connect and keep in touch.”

In fact, he was preparing to go to the wedding of a close friend with whom he had been gaming for seven years—one whom he had never met face-to-face.

Wes himself has more than an academic interest in video games. “I’ve been playing since the fourth grade when the Atari 2600 came out, and I’ve had every console since. My son is 13, he has been playing since age 2 or 3, Lego Batman games. It’s a way for us to connect as family.”

Even club advisors can hear the siren call of gaming long hours. “You can come up over a hill and just see a vast landscape that’s never been explored. That’s what hooks me—it’s 2 in the morning and I have to go to work in the morning, and I’m like, just one more village!” 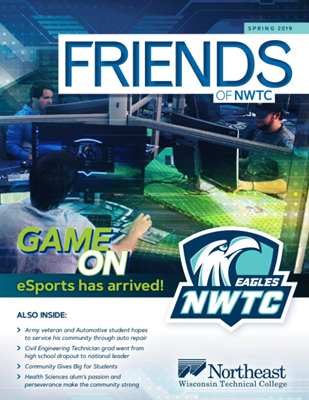