At Northeast Wisconsin Technical College, we recognize our Green Bay campus is located on the ancestral and present-day lands of Indigenous people. The following land acknowledgment affirms our continual commitment to Native nations: 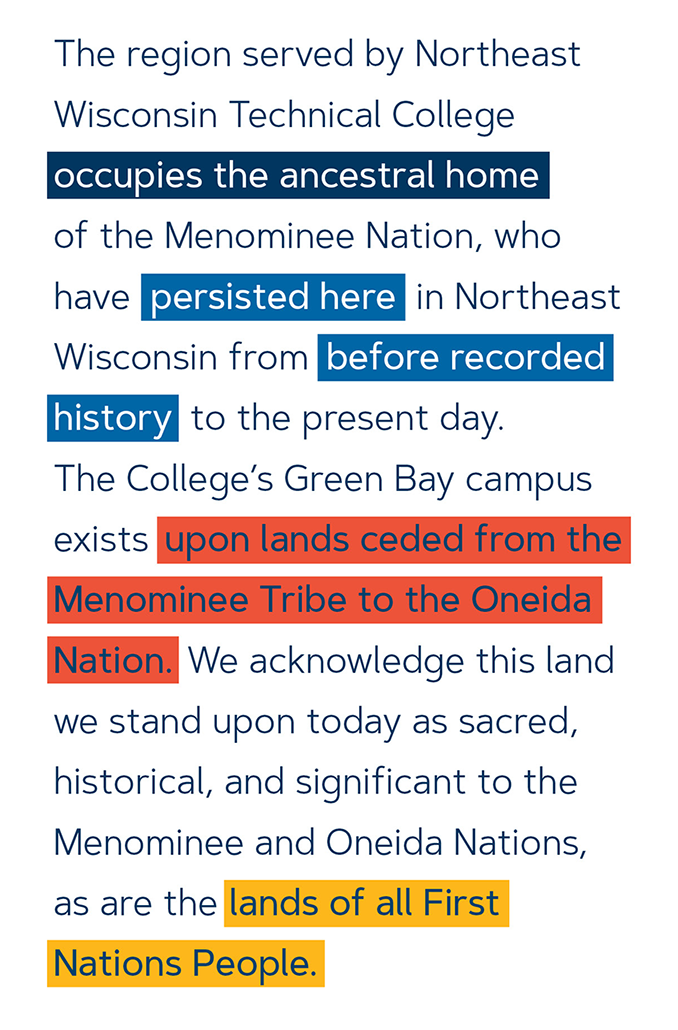 What is a Land Acknowledgment Statement?

A land acknowledgment is a formal statement recognizing, honoring, and respecting the Indigenous peoples as traditional stewards of the land.

Why do we recognize the land?

“Acknowledgment by itself is a small gesture. It becomes meaningful when coupled with authentic relationships and informed action. But this beginning can be an opening to greater public consciousness of Native sovereignty and cultural rights, a step toward equitable relationship and reconciliation.”…

“Acknowledgment is a simple, powerful way of showing
respect and a step toward correcting the stories
and practices that erase Indigenous people’s history
and culture and toward inviting and honoring the truth.
U.S. Department of Arts and Culture

NWTC recognizes the importance and value of establishing a land acknowledgment statement as a way to expand inclusivity. Recognizing the land fosters open dialogue and community building. It is a way to acknowledge, honor, and respect the land we reside on while also recognizing the Indigenous Peoples, both past and present, who live and work the land.

When should this land acknowledgment be used?

A land acknowledgment is usually verbally given before the start of a large gathering or special event such as Graduation.